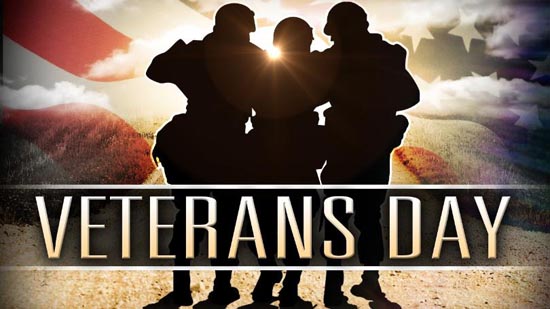 Veterans Day is an official United States holiday observed on November 11th every year. While Memorial Day remembers those who have died while serving in any of the branches of the U.S. Armed Forces — Army, Navy, Marines, and Coast Guard, Veterans Day honors all members of the armed forces, especially the living. As a U.S. federal holiday, government offices and schools are closed, and most people have the day off from work. Banks are also closed. If November 11th falls on a Sunday, then the holiday is observed on the following Monday.

The holiday was first observed after World War I, which ended On November 11 1918. It was called Armistice Day then and was more about celebrating the absence of war and honoring those that served in that one war. It didn’t become known as Veterans Day until 1954 after World War II and the Korean War, when there were many more members of the armed forces.

Many restaurants offer free meals to veterans on the date. There is always a special ceremony at Arlington National Military Cemetery in Washington D.C. This ceremony involves a wreath being placed over the grave of The Unknown Soldier. Many major cities also hold parades on this date. The U.S. flag is usually flown at half-mast as a remembrance to those soldiers who have died and many ceremonies observe a moment of silence for the same reason. In Canada the holiday is called Remembrance Day. One symbol of the day is the poppy flower. The red poppy flower is said to represent or be a symbol of the blood of soldiers. Many people wear or give out poppy flowers on the day.