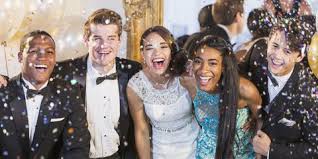 Callie noticed that her son Jesus, a high school senior, was acting very strangely. He seemed to be hoarding his allowance and having many whispery conversations with his friends. When Callie asked Jesus about it, he admitted that he was nervous about prom, a dance held at the end of senior year of high school for those graduating. Jesus was feeling a lot of pressure to ask a girl to be his date for the prom. Girls, like Lexi, were also feeling pressure about a guy they liked asking to the prom. A photographer would be on hand to capture on film forever who said yes.

Then there was the matter of the clothes. Young men like Jesus didn’t have to worry so much. Most of them would just rent tuxedos. Young women, like Lexi, however, had to make sure that whatever dress they wore would be unique. There is nothing more embarrassing than going to the prom and having another girl wearing the same dress.

For the parents, like Callie, one of the biggest stressor was money. Tickets to the prom cost $120 per student. Renting tuxedos cost a lot of money. Not to mention the fact that traditionally he had to buy his date a corsage. Most students split the cost of a limousine among friends.

Callie had more than money on her mind, though. She had heard stories about wild things happening on prom night. She worried about Jesus drinking alcohol, even though he was underage.

Callie encouraged her son not to worry so much about finding a date. Maybe he could go to prom with a group of friends. That was what Jesus ended up doing. It was fine until it was time to be photographed. All of Jesus’s friends split up into couples. Jesus posed alone.