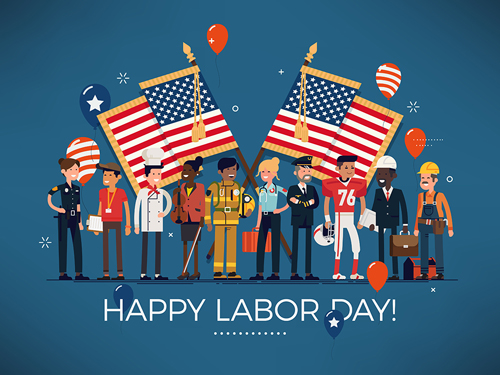 Labor Day is observed on the first Monday of September. It is a holiday meant to honor the contributions, both economic and social, of U.S. workers. It has been an official federal holiday since 1894, meaning that government offices including post offices and schools are closed.

It is also widely thought that Labor Day was created as an alternative holiday to May Day. May Day, especially in the 1800s, had become a protest day, when workers marched to demand better rights and working conditions. There were often strikes that ended in violence. At the time, the U.S. government was afraid that May Day was being led by communists and was having a bad influence on workers. Some people feel September was also chosen since there are no other holidays between Fourth of July and Thanksgiving in November.

On Labor Day there are usually parades in major cities around the country. Politicians and labor leaders make speeches and hold press conferences. Labor Day is also considered the unofficial end of summer. Many people celebrate Labor Day with trips to the beaches, picnics, and barbecues. Many towns and cities host fireworks on this day. Many people also take their last summer vacations around this time. Labor Day is also the beginning of the professional and college football season in the U.S.

Labor Day has also become an important retail holiday. Many stores have Labor Day sales to coincide with the start of the school year for many children in the U.S. This means that many store workers, while their holiday is being celebrated, have to work long hours.