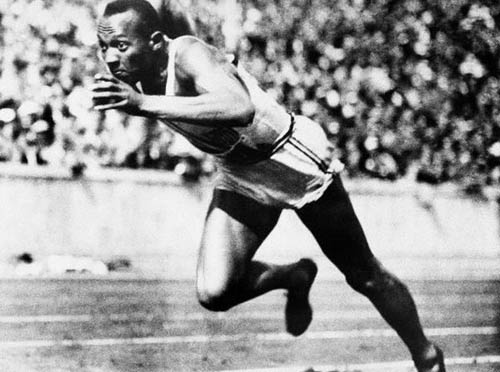 During the 1936 Olympic Games in Berlin, Germany, Chancellor Adolf Hitler vowed to use the games to showcase Aryan superiority to the rest of the world. Hitler was convinced that the white, Aryan male was part of the superior race, and promised his games would prove this superiority on the Olympic stage. American track and field athlete, James “Jesse” Owens, had a different idea.

Owens was an excellent athlete at Ohio State University during the early 1930s. During one track meet in 1935, Owens set three world records, and tied another, in what has been called “the greatest 45 minutes ever in sports.” Although Owens found great success in his athletic career, he grew up during a time in America when black people were still highly discriminated against. Segregation laws were still in effect in many parts of the country, and Owens felt this prejudice directly. He was not able to stay in the same hotel rooms as his white teammates, nor was he allowed to eat at the same restaurants. Ironically, Owens was treated better during his time at the 36th Olympics in Germany.

During the games, Hitler became annoyed that Owens was winning so many gold medals. Owens was proving Hitler’s racist claims and rhetoric as untrue. Hitler didn’t like it. Owens ended up winning four gold medals at these games. Hitler refused to shake his hand. One of the defining moments of the games is when Owens was befriended by German athlete Luz Long. Owens cherished his friendship with Long, especially because he knew that Long could fall out of favor with Hitler’s brutal regime.

Many German fans shook Owen’s hands, even though Hitler did not, but when Owens returned to the United States, he found not much had changed in there.