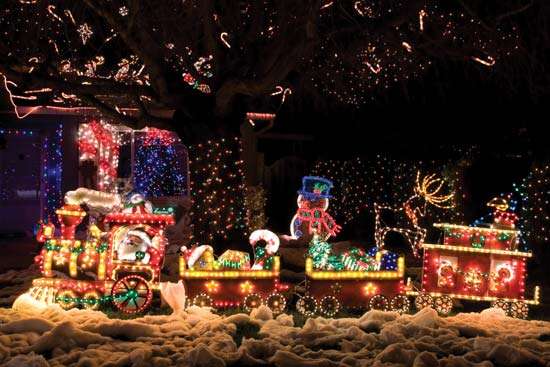 Christmas, observed on December 25, is a Christian holiday that celebrates the birth of Jesus Christ. Christians of different denominations go to church on Christmas. Many Catholics go to midnight mass. In the United States, however, the holiday has a much more secular tone, and is celebrated throughout the country. Many people, regardless of their religion, put up and decorate a Christmas tree. The tree can be a real evergreen or it can be an artificial tree. Lights, strings, tinsel, and even popcorn can be used to decorate a Christmas tree. On the top of the tree is a star or an angel. The decorations are usually red and green.

The purpose of a Christmas tree is to have a central location to place gifts. According to legend, a jolly fat man with a beard, named Santa Claus, leaves presents under the tree.Children in the U.S. often write lists of things they want Santa to bring them. Many parents bring their children to shopping malls across the country to tell a man dressed as Santawhat they want. These children are often also photographed with the mall Santa as a keepsake. On Christmas Eve many children leave milk and cookies for Santa. Of course it is the parents that buy the gifts from the wish lists, and even eat the cookies and drink the milk. On Christmas Day children usually wake up early and run to the tree so they can seewhat Santa brought them. Adults can also exchange gifts at this time.

People don’t just decorate a tree at Christmas. Many also elaborately decorate their homes with lights. Some of the displays are even synchronized to Christmas songs called carols. Originally these songs were religious, but now they are about the spirit of the season.