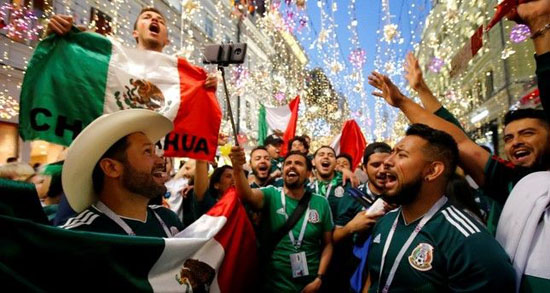 The Mexican national soccer team had just won a match against Croatia in the World Cup. This meant that Mexico advanced to the next round. Mexican soccer fans worldwide are known for loyalty to their team. After this win, however, some wonder if they took their loyalty too far.

In Huntington Park, California, fans took to the street after the win. The afternoon crowd grew to almost 200 people. The fans waved flags, yelled, honked their cars, and jumped around the streets. The crowd was so big that they blocked traffic. This caused traffic jams in the area. While most of these fans were just overzealous, a handful were intoxicated. Instead of just celebrating, they began throwing bottles. Some of the fans even began rocking cars parked on the streets. Police were called to the scene. Not only did the local police department send in patrol cars, two police helicopters flew overhead and some police on horseback began to try to disperse the crowd. Someone threw a bottle at a police horse. Police urged shop owners to close their businesses. The police arrested five people. Thankfully no one was hurt.

When Mexico played again the following week, police patrolled the streets in advance. This time they were going to be prepared if Mexico won again. Mexico was playing against the Netherlands. The Dutch team won 2-1. Mexican fans in Huntington Park still took to the streets despite the loss. This time the police were waiting in riot gear. The fans waved flags, chanted, honked horns, rocked cars and even lit firecrackers but no one threw bottles. The police didn’t arrest anyone. They did have to close off three blocks to traffic, though. The police were probably secretly glad that Mexico didn’t win. In four years, when the next World Cup happens, they’ll worry about it again.